These vile people have been emboldened to voice their hate/bigotry in the new MAGA/QAnon hellscape that is America.
Mark my words, they are coming, likely sooner than later. They will be wrapped in the flag and quoting bible verses. And they are coming for all those who refuse to accept their fascist, post-truth, anti-intellectual, vision of America. Roe v. Wade is just the beginning. 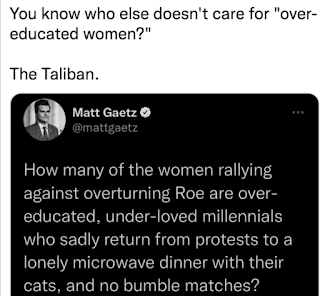 Posted by johnforest at 8:43 AM No comments:

I recently watched the remake of The Day the Earth Stood Still. For those who aren't sci-fi fans, the premise of the film is an alien representing a galactic civilization comes to earth. His mission is to warn off humanity from its destructive path in order to preserve Earth as one of the few habitable planets. Also, the aliens can't risk humans expanding their infantile behavior and petty aggressions beyond our planet. The carrot is humanity eventually becoming a partner in an advanced civilization of worlds. Peace, prosperity, good health and long life become the norms. The stick is the extermination of the problematic species- us. A handful of caring folks manage to convince the alien we've seen the error of our ways and we are on the precipice of sweeping positive change. It's uplifting for about two minutes. Then the flood of current events puts things in stark relief.
It is now many decades after the "duck and cover" nuclear drills I remember from my elementary school days. And we still live with the looming danger. FYI, during the height of the cold war, the Doomsday Clock was further from midnight than it is right now.
Link to event in New York City
Amnesia Atomica
Posted by johnforest at 8:01 AM No comments:

I often feel caught between the loonies on the far right (which now includes most of the Republican party and the rather more well-meaning but not always critical thinking folks on my team (re: the liberals/progressives).
I know there are still sane conservatives in America but I have basically given up on deep conversation with most Republicans. They are just too far gone. So my comments are for whatever reasonable humans remain. I did not write the following but, had I sat down to do so, I doubt I'd have done better. I can't say whether or not the original author would have included things like "micro-aggressions" in the list, but I unabashedly do.

The obsessive judgment of virtue isn’t merely tiresome, it is intensely divisive. A world in which everyone is always suspected of being racist or sexist or whatever-it doesn’t lead to inclusivity. Instead it creates a cynical, dogged, frustrated, and jealously controlling society that pits all against all: men against women, poor against rich, natives agains immigrants, heterosexuals against homosexuals, and so on.

Posted by johnforest at 8:19 AM No comments:

Of course, each incident is discrete and needs to be judged on the merits, but in a broad general way, I totally believe this happens. Both the more innocent examples and the more creepy/intrusive examples. That said, I do not accept the premise of male disbelief being the real problem here. In fact, I'd argue that type of thinking tends to alienate male allies. I wonder if any of my liberals can both accept the broad statement of belief in the existence of the problem and still bring critical thinking to the topic?

I can think of multiple complicating factors. None of them have to do with belief. Also, I am pretty certain we don't want policies and social responses based solely on belief. Such ideas are appealing on a surface level because they are simple and black or white. In fact, how we interact physically in the same space includes a complex  array of factors. Cultural norms, familiarity, changes in the nature of relationships from less intimate to more intimate or the reverse. The list goes on.

Posted by johnforest at 6:30 PM No comments: 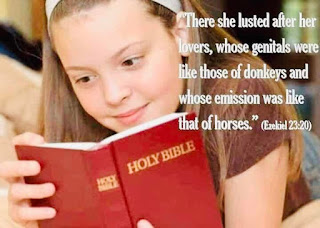 It's funny, I only went for a couple of years but I don't remember these passages from my early childhood bible classes. On the other hand, our bible studies teacher might have considered the more overt deviant sexual references to be just a bit too much religion for six year olds. I do remember some of the demented murderous/war related passages but they were offered in such a wholesome positive way. Which is to say, the good guys were being oppressed by the bad guys and it was all part of God's plan to get those folks on the straight and narrow or the good guys were kicking some bad guy ass in righteous retribution which was, again, all part of God's plan. And, of course, the lessons were blunted by the fact that I had no clear idea of war and carnage either inspired entirely by human motivations or by heavenly design.
All this to say that I may have squeaked by the worst trauma one might have experienced from bible class by having half-ass non-committed Protestant parents who would rather have been golfing on a Sunday morning after they dropped the kids with the babysitter. Sure, it is speculation, but maybe the third year is when they did a deep dive into the really heinous material.
Whew!
So, in the same way that I would not want to ban books (including religious texts) I would certainly not want my children reading them (especially unsupervised) while they were young. Neither would I want them reading Ken Kesey or Kurt Vonnegut or a host of others before they had a solid foundation in reason, critical thought, and the principles of human decency so they were ready to question and puzzle through such material.
Posted by johnforest at 9:11 AM No comments:

When anybody (politician, pundit, journalist, etc.) hurls the word socialist as an epithet, it might be helpful to remember this. There are different flavors of socialism just as there are different flavors of capitalism. communism, and democracy. While no system is perfect and each country has its own set of problems, the moderate form of socialism called democratic socialism is capitalist friendly and works quite well in peaceful wealthy countries around the world. Germany, Holland, Denmark, and France to name a few. In these countries, despite what the haters say, there are wealthy people, thriving corporations, etc. What one does not see in such places, rampant homelessness and people declaring bankruptcy due to medical bills. Also, most of their cities are cleaner and safer. They often have quality education accessible to more people. They generally have less pollution, use more renewable energy and so on. One does not see as many people mistrustful of their government's motives. Why? It is largely because the government is organized around taking care of its citizens first. 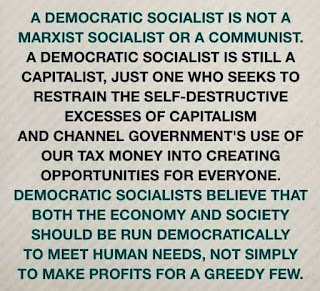 Posted by johnforest at 6:33 AM No comments:

Anyone else hear that swishing sound? I sure hope I am wrong but, I strongly suspect it is caused by a great democratic republic swirling around the drainpipe of history. Sad times, but especially that it is being brought down from within. Adding insult to injury, it isn't the result of some fiendishly clever plan by a comicbook style arch-villian. All it took was for the foolish, the ignorant, and the deluded to rally around one of their own.
It is also fair to say, the process of fucking us all was lubricated by the silence of those who knew better (senators, congresspersons, and others). Each, at some point, made a calculation. Each one decided that convicting the leader brought an unwelcome burden of personal guilt and blame. In the end, they stamped their feet to muddy the waters as they opted to further line their pockets and advance their own selfish agendas.
Posted by johnforest at 8:39 AM No comments:

IT'S GOOD TO HAVE A PLAN 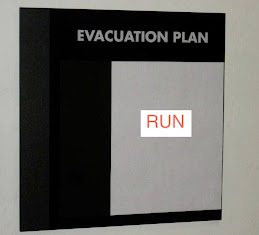